Marianne Karth, who lost two daughters in a crash, wrote:

My grandson just turned 10 years-old. Lately I’ve been noticing little things that show me how much he is maturing and taking responsibility. And I keep thinking how proud AnnaLeah and Mary would be of him. They both spent so much time with him from the time he was born. 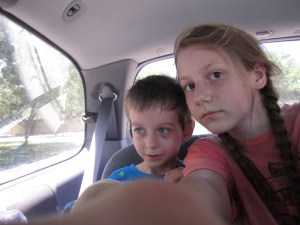 One thing Marcus asked me about the other day was when he saw my copy of the book Car Safety Wars by Michael Lemov. Car safety wars, he asked?  So I had to try and explain it. I asked him what a war is and what happens in a war. And we talked about how it’s a war because while we’re “fighting for” some things to make cars and roads safer, other people are fighting against them.

And Marianne Karth asks:“So why is protection from vehicle violence not listed on the Democratic Party Platform?
July 24, 2016Uncategorizedtraffic safety, vehicle violenceMarianne

The 2016 Democratic Party Platform is quite lengthy and I am sure contains many things of interest to many Americans. But the federal government has one role that is unquestionable: to protect its citizens.

. . . the right to protection was not merely a matter of constitutional theory, but a doctrine with concrete legal meaning. In the common law tradition, the protection of the law implied both the recognition of fundamental rights by law, and the enforcement of such rights by government. The paradigmatic instance was the government’s duty to protect individuals against violence. By the middle of the nineteenth century, this duty was understood to include not only the enforcement of civil and criminal law with respect to injuries already committed, but also the responsibility to prevent violence before it occurred. THE FIRST DUTY OF GOVERNMENT: PROTECTION, LIBERTY AND THE FOURTEENTH AMENDMENT 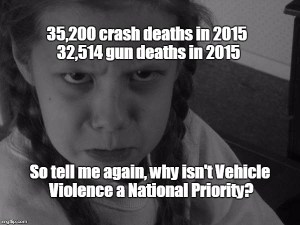 Marianne’s questions are aimed at making us all safer.  She knows the tragedy of vehicle violence first hand.
I trace the preventability of her tragedy to the first days of the Reagan Administration when NHTSA work on truck underride guards was demoted in the name of “deregulation”.  Reagan appointed Raymond Peck, a former coal industry lobbyist.  NHTSA staff were demoted and reduced by 33% or about 300 people out the door (Now an industry Revolving Door).  And the airbag rule was rescinded.  It took a better Supreme Court than we have today to overturn the Reagan rescission with the words “For nearly a decade, the automobile industry has waged the regulatory equivalent of war against the air bag and lost — the inflatable restraint was proved sufficiently  effective.”  Story at Car Safety Wars, p. 163. Seehttps://www.amazon.com/Car-Safety-Wars-Technology-Politics/dp/1611477476/ref=sr_1_1?s=books&ie=UTF8&qid=1469371675&sr=1-1&keywords=car+safety+wars
Disclosure:  I had the honor, working under Joan Claybrook, to have a role in writing and editing the 1980 NHTSA Report “Automobile Occupant Crash Protection, Progress Report No. 3” that the Supreme Court cited.  See https://www.careforcrashvictims.com/assets/1980fullreport.pdf
Hopefully Marianne’s  writings will help our future be safer.
Lou Lombardo