Dear Care for Crash Victims Community Members:
On “October 7, 2004, two Houck sisters were killed in “a Chrysler PT Cruiser rented from Enterprise Rent-A-Car, that had been recalled for a safety defect that could cause an engine fire, but the corporation had failed to repair it.”
On December 4, 2015, the Raechel and Jacqueline Houck Safe Rental Car Act was signed into law.“
This is an important story.  More important to Americans than the coverage of most of what is seen on TV and in the papers.  The NY Times covered some of the battles, but not the victory yet as far as my search could find.  See http://www.nytimes.com/2014/05/09/business/recalled-used-cars-roam-the-roads-as-federal-legislation-stalls.html?_r=0
Reasons Why This Is An Important Book
*  The inequality of power of people vs. corporate and governmental power and money has never been greater. *  Safety victories are too rare in the U.S.A. today.
*  The American people need to know that safety advances can be made with persistence plus political and community support.
See the press release below by one of my safety heroes Ben Kelley, about the struggles, on our behalf, of Carol Houck and her family.
Immediate Release – See Bottom For Contact, Author Information 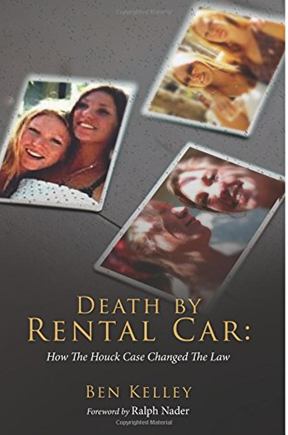 New Book Gives Gripping Account
Of Eleven-Year Legal Saga Triggered
By Sisters’ Defective Rental Car Deaths
Monterey, CA –When the Houck sisters were killed in a fiery head-on collision late one afternoon in October 2004, California state police blamed it on Raechel Houck, 24, the driver. She had made an “unsafe turning maneuver,” they said. “It’s a very rural stretch and people can fall asleep or lose control easily or not pay attention.”
But in reality, a defective Chrysler PT Cruiser and a huge rental car company’s callous indifference to customer safety caused the tragedy. Even though Enterprise Rent-A-Car had been notified more than a month earlier that the PT Cruiser was under recall, it rented the vehicle to the young women without fixing its lethal defect – a flaw in the power steering hose that allowed flammable power brake fluid to leak onto hot engine surfaces and burst into flames.
The Houck sisters’ violent deaths were the start of an incredible eleven-year saga that culminated in the congressional passage last December of a landmark law, the Raechel and Jacqueline Houck Safe Rental Car Act of 2015, banning rental car companies from keeping recalled vehicles in service without fixing their defects. A new book, “Death by Rental Car: How The Houck Case Changed The Law,” by Ben Kelley, documents that saga in spellbinding detail. A “real-life courtroom thriller” that “reads like a suspense novel,” reviewers wrote.
In a foreword to “Death By Rental Car,” Ralph Nader calls it a “compelling story of corporate eva­sion and duplicity” and the “dedicated, persistent personal injury attorneys” who fought for the Houcks in their lawsuit against the giant rental car corporation – and ultimately won. The Houcks “saw beyond their own personal tragedy” when they pursued their lawsuit, Nader writes; it was a way to “advance the public’s right to know what both Chrysler and Enterprise Rental wanted kept secret. Drivers and passengers on the roads were in danger.”
“Death by Rental Car” gives a blow-by-blow account of Houck v. Enterprise, the parents’ hard-fought lawsuit against Enterprise. Drawing from the testimony of experts and witnesses in the lawsuit, the book takes the reader inside the litigation, in which the rental car corporation, despite overwhelming evidence to the contrary, aggressively attempted to blame Raechel Houck for causing the crash.  But what caused the crash was the defect, which triggered an engine compartment fire. Smoke penetrated the passenger compartment, frightening Raechel and causing her to veer off the road and into the path of an oncoming tractor-trailer.
Challenging Enterprise’s campaign to shirk blame for the crash were two lawyers, Larry Grassini and Roland Wrinkle, who represented the Houck parents. They resolutely fought back against Enterprise’s “blame the victim” legal tactics and secrecy strategy and brought the case to a successful conclusion. When Enterprise tried to settle the case by paying the parents a few million dollars in return for their agreement to hide the facts of the crash and Enterprise’s role in causing it, they joined the Houcks in rejecting the offer. Grassini said he was “inspired by the bravery” of the Houck parents, who “refused to take any amount of money in exchange for muzzling them from exposing Enterprise’s business practice of renting recalled cars.”
After the trial in Houck v. Enterprise, the sisters’ mother, Carol “Cally” Houck, embarked on a crusade to win passage of new laws to forbid rental car companies from keeping recalled vehicles in service without first repairing them. Her criterion for an effective law was simple: “If it would have saved my daughters, it’s a good law. If it wouldn’t have, it’s no use.” Her effort, supported by leading safety advocacy groups in California and Washington, led to passage in December of the Raechel and Jacqueline Houck Safe Rental Car Act.
“Death By Rental Car” is available from Amazon.com in print and Kindle formats at this link. The book’s Table of Contents is below.
ABOUT THE AUTHOR: Ben Kelley is a nationally renowned expert on auto safety issues. The Los Angeles Times called him a“pioneer in vehicle safety research.” His commentaries have appeared in newspapers throughout the country and are featured on the www.Fairwarning.org consumer information website. His biography and bibliography are atwww.producthazardconsulting.com.
CONTACTS: For information about the book or to obtain review copies, please contactben.kelley@yahoo.com, or phone him at (831) 920 2460. To contact or arrange interviews with Carol Houck or Larry Grassini, please use the following email addresses and phone numbers: Carol Houck,spendard@juno.com, (805) 479 2545; Larry Grassini, lpgrassini@gmail.com.      (818) 348 1717

I recommend our community buy this excellent and important book, read it, and be both educated and inspired by it.